Just coming back for the tumbleweed, because I know that there's no actual readers to redirect to there.

Haven't made a post in a while... long day at work today... tired... email about a figure sale... no money... want to save up for a ps3 or new computer around christmas... can't stop looking though... post links to take my mind off of it. Haven't even bought a figure in months, hell... already out of space for them anyway.

Lately I've felt like playing Ragnarok again, so as soon as MystRO is up to version 2.0 I'll be playing it. Assuming that fixes the problem I'm having installing 1.0. Apparently It should be out really soon, as in this weekend.

Thanks to a livestream channel I watch I found out that valve is selling all of their Half Life stuff on Steam for 55.8% off. So I'm grabbing the Half-life pack and Half Life 2/Lost Coast and Half Life:Source right now, all for cheap.

Might be grabbing Portal and Episodes One and Two after I figure out if they'll run well or not.

Until all those are done downloading, guess I'll be continuing another playthrough of Mass Effect, and checking my youtube for comments like an idiot. Fun.

It's amazing. Made a Japanese xbox live account, and got a free gold upgrade (because it was my first account there) so I got access to it and all the other demos I'd want to play.

The game's great, just what I'd expect from Platinum games (former studio Clover) given the games they've made in the past and the great games they've made recently. The director is none other than Hideki Kamiya; planner of the first two resident evils, director of both the original Devil May Cry, Viewtiful Joe, and Okami.

If you like action games you can't beat the control scheme and amount of combos you can do in this game. It's amazingly fluid, you cant even get hooked into combos because everything can be canceled out of; the system is very well constructed. I found a forum post that explains it better than I can:

It also isn't like the games just an overly easy button masher, either. Enemies will do some pretty bad damage if you aren't dodging constantly. They attack when they can, and they can be irritating because in the heat of battle you miss the signs that attacks are coming. I'd say the worst part where that happens is the falling clocktower. Along with some camera issues, with the amount of things going on onscreen it can nearly impossible to notice when an enemies getting ready to slash at you. I just dodge around and hope I don't get hit, but I tend to take some pretty bad damage at that part even when I usually beat the rest of the demo without getting hit more than once more. (Having beat it so many times already).

Platinum games developed it entirely for the xbox, and then gave Sega the job of porting it to the PS3. The results are sad. Worse framerates, and generally weaker graphics. Just look at these screens: http://www.gfdata.de/archiv09-2009-gamefront/4534.html

There's actually a good amount of missing detail. Hopefully Sega fixes it up.

Back to japanese xbox live, too bad the on-demand games are all region locked. Wouldn't mind trying out Id@Lmaster, truthfully. Also, Magnacarta 2 has Aya Hirano? I just downloaded the demo and started playing and went holy shit when I heard her voice, now that's two games I've run across with her in it randomly (first was Eternal Sonata/Trusty Bell). But, there's a major issue with this one; no japanese dub is going to be included in the US release. It isn't an amazing game in the first place and without that... no point in buying it. I'll keep the demo though.

Need to buy a new keyboard, because once again I knocked fucking soda onto it.
I just can't have nice things, I guess.

Been playing mainly Ys Seven, Disgaea Afternoon of Darkness, Ys Origin, and Call of Duty 4. Still plan on getting through Eternal Sonata one more time and get the achievements. I like the game enough to go for them.

On a final note, that Vivi figure I ordered months ago finally came, best black mage figure you can get probably. Looks amazing, and I'm glad I finally own something like it. Now I just need an Airship model or something. 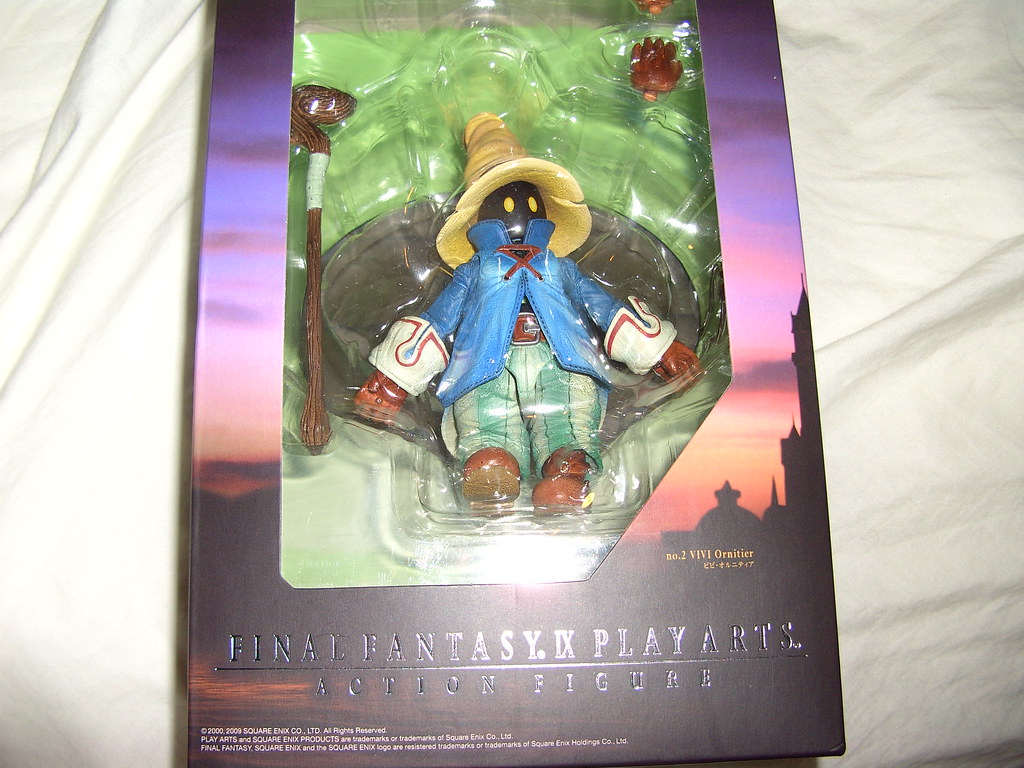 Finally, I'll end it with a cool vid. Someone taking on Lich with a party of level 1s. That's something interesting about Final Fantasy 9. It's more about the equipment and smarts than it is grinding. It's interesting to see a level 1 with 50-100hp and 20-40mp doing 9k+ damage.

It's getting monotonous. Got up to 23 on my priest, don't care to play any other class either.
The real problem is the lack of quests. I have 2 whole levels to grind through before quests become available again. Also the lack of fighting moves, and laggers and idiots. Sigh

In other news, went out and bought a hdmi lcd monitor and a hdmi 360 cable. Finally, I can enjoy playing 360 with real HD instead of on my standard tv set. Everything looks amazing, seriously. Notably Eternal Sonata (Trusty Bell). Should have done it sooner. Really cheap way to get HD without paying out the ass. It came with a vga cable as well so now both my 360 and pc are hooked up to it. I just switch between the VGA and HDMI modes on the monitor to cycle between them, it's cool.

Got my priest up to level 17 and about 70% today. Which means I should have either a Monk or Exorcist before work tomorrow. Now that I've come this far it's kinda hard to decide what to pick. I'll probably pick Monk(Infighter) like I originally planned, but who knows. Seems like there's a lot of them around already. Assuming the prists with the glowing hands in town are monks.

I recorded another video, this time doing the boss in Dragonoid Nest Solo. Good fun.
I was doing the full dungeon for items, so I went solo to get all the ones I needed.


Ran out of fatigue points, or else I'd go for the next class right now. Sigh...

Too many fucking spammers is all I can say. There are 3 in the main noob town, then 2-3 on the side road where people stand packed waiting to get into Dungeons. It fucking sucks, you can't even talk, you get drowned out. Bullshit.

I made it up to level 15, and I figured out the best ways to get parties so I quit going solo so much, because the Dungeons are getting way too hard to try to solo without healing items. That's right, no healing items. The only shop selling healing items sells them for a ton of gold and PVP POINTS. YEP. PVP POINTS TO BUY HEALING ITEMS. Man I'm having doubts about this game, but it's still decent fun and a time waster. Getting a team of 4 and bashing through a dungeon is still good fun.

I'm also annoyed that everyone looks the same, and since this is the very first version of the game the Priests don't look as awesome as the Korean/Japanese game counterparts.

After training for a few hours today I got to lvl 15. But, I am now out of quests. No more epic quests to do and the general quests are all gone minus ones I passed up at earlier levels (time runs through dungeons and stuff). So what do I do now? Run through dungeons over and over till I level? Sounds like GRINDING to me. No big surprise though, this is a Korean MMO.

Got up to level 12 before I ran out of "Fatique points" AKA complete bullshit.
I recorded a movie using the ingame recording feature, crappy quality though:

With nothing to do in town I thought I'd try out PVP, so I went to the lowest PVP class (Beginner) and after looking around for a fight to join in I got an invite from a group called "3v3 NO LAG" (sign of elitism, shouldnt have even accepted) so I joined in. Fight starts, and it's a rape. I die first, because I of course have no PVP experience and immediately someone says FUCKING RAKAN SUCKS and some other shit. The typical bullshit you'd find in a PVP room. First of all, why are they all in the BEGINNER CLASS when they obviously know how to fucking fight well already, and WHY would they even be taking it seriously? Then after I tell them I had never pvped in the game before one tells me to do the "ground pound" attack or some shit. I have no idea what the fuck he was talking about even now. I don't have an attack like that. Anyway, next fight starts and it's the same story. I do a little better but its the same shit so I told them they werent as "beginner" as I hoped and I told them I was out. Then one of the dickheads says AND HES LAGGING and they all start making remarks. Then the FUCKHEAD said oh wait nevermind as I hit the exit button. FUCK PVP IN DFO. WORST FIRST IMPRESSION IN A GAME IVE EVER HAD.